Prompted by a colleague’s question about profiling the startup time of Apache Sling systems, I vaguely remembered writing something a while ago, but couldn’t find it immediately.

Funny how one’s memory works – it took me a while to find it again, but I did indeed write an OSGi events recorder + timeline utility in SLING-1109.

That utility has since moved to the Apache Felix webconsole events plugin bundle, which is included in the Sling launchpad and thus was right here under my eyes.

Here’s how you can use that webconsole plugin to get a simple timeline of an OSGi system’s startup:

This provides a simple graphical timeline, as shown on the screenshot below, that’s especially useful in detecting outlier bundles or services that take a long time to start up. 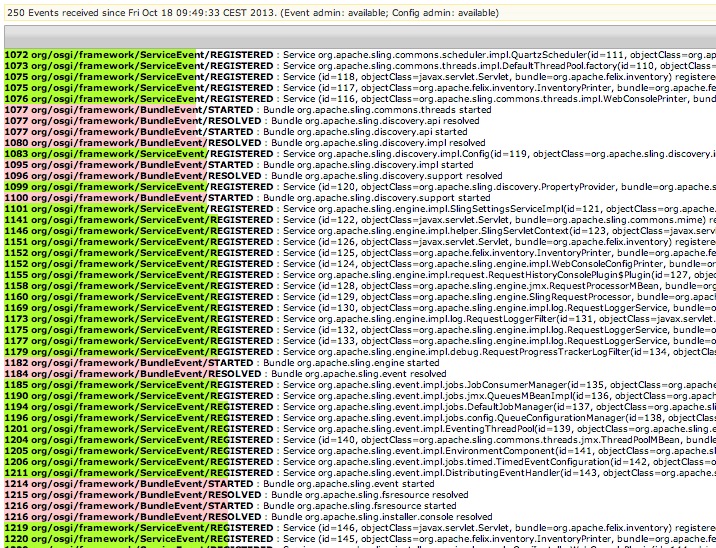 Comments Off on Simple startup profiling of OSGi applications |

MANIFEST.MF must be the first resource in a jar file – here’s how to fix broken jars

Some tools, like the Sling OSGi Installer, require the MANIFEST.MF to be the first file in a jar file, or they won’t find it.

This happens when using the java.util.jar.JarInputStream class to read a jar’s manifest, for example.

The manifest is where OSGi bundle headers are found, for example, so not having it in the right place makes the jar unusuable as a bundle.

I won’t discuss here whether this requirement is part of the jar file spec (it would make sense, as this makes sure you can read it quickly even from a huge jar file), but anyway there are many cases where this is required.

To fix a jar where this is not the case, you need to unpack the jar and recreate it, as in this example, starting from a broken.jar in the current directory:

That’s it – creating the new jar with the jar utility puts the MANIFEST.MF in the right place.

Comments Off on MANIFEST.MF must be the first resource in a jar file – here’s how to fix broken jars |