The ASF is the Switzerland of Open Source 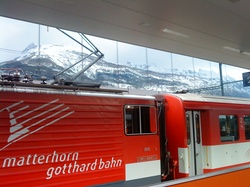 By popular demand (two people – that’s about 100% of my readership!), here’s an essay similar to my lightning talk of last week at ApacheCon: The Apache Software Foundation is the Switzerland of Open Source.

This is based on my rough notes and failing memory, so that won’t be exactly the same thing.

Did you know that I am an ASF analyst? I didn’t know either, found out last week at James Governor‘s great keynote. You had to be there ;-)

So, tongue firmly set in cheek, here we go!

The Apache Software Foundation (ASF) is a lot like Switzerland. Having been involved in the former for the last nine years, and in the latter for all of my life (which means…a few years), I can rightly consider myself an expert in comparing them.

There are lots of similarities, but Switzerland is a lot older, 708 years to be precise. Switzerland was founded by people from what we call the primitive cantons: Uri, Schwytz and Unterwald. City people often consider folks from those places as being old guys with obsolete ideas, and don’t really pay attention to them. The ASF has founders. Don’t get me wrong – I didn’t say the comparison applies.

Switzerland is multilingual, and we don’t always understand each other well. It also has a solid Roeschtigraben that separates the german and french speaking parts. A wall of Roeschti…like between the C and Java camps of the ASF?

Switzerland has the fondue, a slimy mix of stuff that people try to share among themselves in a fair way. The ASF has a famous member’s discussion list, which is also a bit slimy at times.

Switzerland has beautiful, bright mountains that you can see from far away. The ASF has the HTTP server, Hadoop, and other world famous projects. Switzerland also has dark, remote, deep valleys where almost no one wants to go. The ASF…well, let’s not go there…

According to Wikipedia, the Swiss Alps constitute an extreme environment. Lots of places in the ASF are like that…and Wikipedia goes on to say that the climate varies a lot between localities in Switzerland. You probably see what I mean!

Switzerland is not part of the European Community. We are the best anyway, why should we care? Lots of parallels here.

Contrary to the ASF, Switzerland does not have an Incubator and does not accept new cantons. Swiss folks are not that crazy.

Some Swiss cantons still use the Landsgemeinde to vote. People gather on the village’s main square and vote by raising their hands. A raised hand means +1, and unraised hand means -1 (or something like that). The ASF’s voting rules are more precise here! It’s only relatively recently that women started having the right to vote in the Landsgemeinde, and people used to have to show their military sword to be accepted. Do you have an iCLA on file?

Switzerland does not have a real boss. The citizens are the boss, at least in theory, and to handle current affairs we have a federal council of 7 people. Some Swiss citizens think that those people just talk a lot and don’t do anything useful. I won’t make any parallels with the ASF’s board of directors, of course ;-)

This entry was posted on Monday, March 30th, 2009 at 9:09 pm and is filed under ApacheCon, asf, Fun. You can follow any responses to this entry through the RSS 2.0 feed. Both comments and pings are currently closed.

12 Responses to The ASF is the Switzerland of Open Source