I’m sorry to be ranting here instead of writing about more creative things, but here’s a perfect example of the “second-system effect” – replacing simple software that works perfectly well with something supposedly more powerful…that doesn’t work.

My Sony Xperia V phone used to upgrade over the air. Get a notification, wait until you have a good Internet connection, start the upgrade, wait a few minutes and you’re done. Who needs more than that?

Sony apparently thinks that’s too simple. Or maybe they have other reasons to start forcing users to use their brand new shiny Sony Bridge desktop software for updates. Reminds me of my first Samsung Galaxy, years ago…I hope Samsung’s over that by now – but I digress.

There doesn’t seem to be another option to upgrade my phone this time, so I play nice, downdload and install the latest Sony Bridge V3.7.1(3710) software tool, connect my phone to my computer and start the bridge tool. Oh, by the way: how do you upgrade if you don’t have a computer? What’s with “mobile first”? But I digress.

And here’s the first “fun” result: the tool refuses to upgrade my phone now because the battery charge is less than 80%. Oh my.

IT IS PLUGGED IN, STUPID! How could you talk to it via USB otherwise? Fail. Sony Bridge, I’m starting to hate you. No, really.

Ok, I’m a good boy. I wait until my battery reaches 80% and try again. Hurray! I can get to the upgrade screen this time.

The tool says “Initializing” and “Talking to Update Engine”.

And it stays there.

Fourty-seven minutes now. 47 MINUTES and exactly nothing else happens. No feedback. No progress. No error messages. Did you guys take UX 101 in school? I guess not. 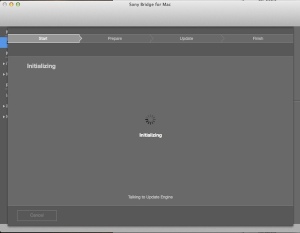 I tried twice. Had to delete some secret cache files in between both attemps, as on the second time the tool was telling me that my phone is up to date, but it’s not, as the phone itself tells me.

The result of this brilliant software evolution? I am unable to upgrade my phone. That will make it useless soon, I guess, and I didn’t pay a sizeable amount of money to have a non-upgradeable phone.

So here we have a perfect example of what software folks should NEVER do: replace a perfectly working simple system (over-the-air updates) which a new shiny thing that DOESN’T WORK and makes me YELL here which is quite unusual. Ok, maybe you don’t care about me yelling, but if you’re Sony I would expect you to be more clever than that.

So, Sony, I guess I’ll ask for a refund for this now useless phone. What do you think?

But of course, the best by far is just to re-enable over-the-air updates. That used to work very well.

Update: I was finally able to upgrade my phone by running the Sony Bridge train wre^H^H^H^H^H^H^H^H^H software on an old macbook. But still…why?

This entry was posted on Thursday, April 3rd, 2014 at 5:08 pm and is filed under Thoughts. You can follow any responses to this entry through the RSS 2.0 feed. Both comments and pings are currently closed.

One Response to Sony Bridge for Mac, a perfect example of second-system effect #fail!